In a previous post we touched a little on the mystery that is Bitcoin and what all the crypto currency entails. Well, in case you were still wondering about the ins and outs of Bitcoin, we’re here to fulfill that curiosity of yours! So, here’s the nitty gritty of Bitcoin; all the fine details you never knew you needed to know.

First and foremost, Bitcoin is a virtual currency, also known as cryptocurrency. What might that be, though? In short, it’s a digital representation of value not issued by a central bank, a public authority, or attached to fiat currency, but is accepted as a means of payment and can be transferred, stored or traded electronically. That’s a mouthful, right? Essentially there is no geographical or physical borders, no government controls it and it can be traded, converted, or accepted.

There are also some nifty little facts attached to Bitcoin. For instance, there’s a limit to the number of Bitcoins that can be issued. There will be no more made after Bitcoin reaches 21,000,000 and this is the case simply because that’s as far as the developer/coder created it to be. The same is true for other forms crypto currency such as Ethereum, Ripple, and Monero.

Now, we stated that virtual currency can be traded, converted and accepted. But you can also ‘mine’ it. Mining, in this context, refers to a process of computer processing that will verify a transaction, bundle the transactions into a block, solve the proof of work problem, then finally once a solution is found, a new block is added to the blockchain. As we’ve stated in our previous post, the blockchain is the code attached to the cryptocurrency that records the transactions, slaps on a timestamp and includes a unique cryptographic signature. Think of a bank statement that lists your transactions for the month, the blockchain acts similarly in listing the transactions.

Why mine, though? Well, it’s quite simply, really. Once a miner solves a blockchain correctly, they are rewarded with 12.5 Bitcoins. If you think about that, the going rate for a single Bitcoin as of today is $6,447, multiply that by 12.5 and you’re going to have a very nice load of cash to sit on. This tends to be the large draw for people jumping onto the Bitcoin bandwagon. Just keep in mind that it takes a lot to mine just a single Bitcoin. Not only do you need to have your computer(s) all set up to solve the blockchains, which can by pricey at first, you also need to run your computer and electricity 24/7 to really make a good go at mining. In America, the average cost per month to mine a single Bitcoin is around $4,758, so if you’re up for that, then more power to you!

With virtual currency, blockchains can be tricky to solve, hence they’re rewarded, but people also have a different way of thinking in regards to the coding of blockchains. Due to this, multiple blockchains can exist, hence developments like Bitcoin Cash, Bitcoin Gold, Bitcoin Diamond, etc. This can happen to any cryptocurrency; people thinking there’s a better way to do things, making changes to code, and thus create two versions of a single code.

That’s all fine and dandy, but after all the ‘behind the scenes’ things are done, where do people keep their virtual currency? Luckily there are ‘wallets’ for these things as well. You can store Bitcoins on your hard drive, a mobile device, your desktop or on the web in the Cloud, it’s really all about your preference. However, keeping your Bitcoins electronically makes them susceptible to typical computer type issues such as viruses, crashes, and things like if you lose the phone you keep it stored on, you’re locked out and it’s very difficult to remedy that.

Crazily enough, the safest way to keep your Bitcoins is to have them printed out onto a paper and then store it in a safe. For instance, walletgenerator.net will allow you to create a custom code that encrypts access to your Bitcoin account and creates a QR Code for you to scan. One of the codes acts as your public address for people to do transactions with you while the other is your private key that only you have to see your account. Think of it like having the address to your house known so people can send you goodies in the mail, and then having the log in code for the security system of your house.

You may be wondering who accepts virtual currency, though? We’re glad you asked, because what’s the point of having virtual currency if you don’t know where to use it? While it might not pop up in your local hometown stores, you can use it at places like Dell, Amazon, Tesla, Expedia, Overstock, Paypal, and more.

The perks of using virtual currency are growing for some people, but the most common reasons people love the stuff is because it’s fast, there are no chargebacks, it isn’t subject to economic inflammation, it’s totally anonymous, and you can create your own money by mining for it. Seems like good enough reasons, right?

We tend to think so as well, but keep in mind that while virtual currency is completely legal, it has to be accounted for properly. Like cash, there is nothing inherently bad about it, it’s all about intent. Someone goes to the grocery store and pays with cash, no crime has been committed. Someone uses cash to buy drugs, then a whole other host of issues have arisen. Virtual currency works in much the same way and unfortunately, it’s a very popular way of paying for things on the dark web.

Keep in mind, though, that like cash tips being accounted for and tax purposes, virtual currency must be as well. If anyone says the government has no idea what to do with it yet, run for the hills, because the government is on top of it all and there are regulations already in place. Think again if you think you can hide your virtual currency or just simply not report it. 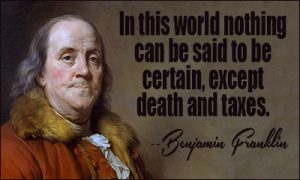 According to IRS Notice 2014-21, virtual currency is to be treated as property for federal tax purposes. If, however, you’re being paid for goods or services, then it is to be treated as income at its fair market value at the date of receipt. Further, if you mine for your virtual currency like Bitcoin, be prepared to have to pay self-employment tax on it. As Benjamin Franklin once said, ‘nothing can be said to be certain, except death and taxes.’ So when in doubt, assume there’s a tax regulation when it comes to anything with money, no matter the format.

For some people, virtual currency such as Bitcoin, Ripple, Monero and the rest have been a great thing. For others, it’s still something of a mystery, something that’s real, but not tangible, something that’s monetary, but all electronic. Whether you’re a fan of it or still perplexed by it, please feel free to ask us questions you may have about it and how it could impact your tax return, we’re happy to help!

About the Author: Kelsey AOB