A Little Bit on Bitcoin

We’re willing to hazard a guess that many of our clients haven’t heard of Bitcoin, or if they have, then it’s highly possible that they’re confused about it. Who can blame them, anyway? Bitcoin isn’t the easiest thing to understand, but we’re going to do our best and break it down for you all. So, hold onto your seatbelts, we’re going to inform you about a lesser known form of currency.

That’s right, you read correctly! Bitcoin is a form of currency; and heads up, if you’re not a fan of technology or electronic forms of money, then steer clear of Bitcoin. But we’re getting ahead of ourselves. Let’s break it down.

Bitcoin has been around for a few years (since 2009) and is basically known as the virtual banking currency of the internet – a form of digital, public money created by a string of mathematical computations and policed by computer users called miners. In short, it’s the strings of code for each Bitcoin, known as blockchains, that have the monetary value. You can use Bitcoin to purchase goods and services online or you can hold onto them and hope their value increases over time. Currently, one Bitcoin is equivalent to $2543.32 USD.

How do you use it, though? You simply trade from one personal wallet to another through the appropriate software. In terms of Bitcoin, your wallet is your personal database that you store on your computer drive, smartphone, tablet or somewhere in the cloud. Bitcoins are stored on the device of your choice, but the history of each Bitcoin you own or spend is publicly stored on the Bitcoin network and every user will be able to see the Bitcoin history. For example, if Target accepted Bitcoin, people could see you made a purchase there. Conversely, people’s names are not attached, the wallets themselves are completely anonymous, therefore no one can see it was you who made the Target purchase. 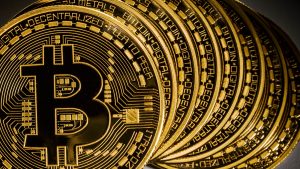 In essence, Bitcoin deals in the currency of swapping electronic codes back and forth through the proper software channels. Not to get into too technical of jargon, but the codes allow for people to keep their anonymity while making purchases and accepting money in return, thus eliminating the concepts of banks; one wallet ‘speaks’ to another and the code is changed.  Who doesn’t love that idea!? In fact, that’s one of the main draws for people to use Bitcoin, there’s no middle man for the transaction and the fees are marginally low when compared to typical monetary institutions. Further, Bitcoins can’t be seized, frozen, or audited by banks and law enforcement.

Now that doesn’t mean the IRS is totally hands free of Bitcoin. Since Bitcoin is not recognized as legal tender, as is the case in other countries, the IRS treats Bitcoin like property and taxes it as such. According to them, the basic and general principles that apply to people’s property applies to transactions through virtual currency. Therefore, tax preparers don’t have to worry about dealing with foreign currency regulations. However, if someone gets their wages via Bitcoin, they are subject to federal income tax withholding and payroll taxes, and businesses accepting Bitcoin will be taxed on the fair market value of the Bitcoin payment as part of their gross income.

Now think about the lack of regulation for a moment…

Bitcoin is not regulated by any government agency, monetary institution, or tax entity and allows people to keep their anonymity, which probably leads you to the logical thought of a grey area existing for criminal activity. This has in fact happened. Bitcoin has been known to be a hotbed for criminal activity since they have the ability to buy Bitcoin in batches in order to move millions of dollars outside the eyes of law enforcement.

Further, the creator(s) of Bitcoin are not known. They’re all about transparency of transaction in order to deter hacking, however, the brains behind the operation are not available. There is an individual who goes by the name of Satoshi Nakamoto, supposedly a man in Japan, but there’s no harden proof of that.

Lastly, it’s not very common to pay via Bitcoin, at least not here in America yet for the average man. Over in China 75% of Bitcoins are traded there, and therefore much more common. Here, however, you’ll be hard pressed to find common, local, businesses that accept it. Therein lies the question, what’s the point?

To be honest, we’re still trying to figure that out ourselves. Bitcoin could prove to be a great investment in the long run. There will be no more Bitcoins created when the total number reaches 21 billion, sometime around the year 2040, though. After that, potentially the value of Bitcoins could go up seeing as how new ones won’t be made.

Then again, thinking in the long run, maybe Bitcoin doesn’t take off here in American and you’re stuck with a coin that means virtually nothing. Or there’s an economic downfall and yet again, your Bitcoin won’t mean as much as say, cold, hard cash.

Like anything in life, we highly recommend that people research Bitcoin greatly before they decide to buy into it or not. Our purpose here is simple, to let people know of things and how they could potentially help or hurt them. If you’d like to check out Bitcoin in depth, please click the link and we wish you the best of luck!

About the Author: Kelsey AOB